@pegleggen Oh no. If you had had a tipple it might not have hurt so much. Wishing your toe a speedy recovery.

@RRaimato Also delighted at move towards neurodiversity as a useful way to reframe the conversation.

I went to my first edCamp last month and although I was only able to stay for one session – on Flipped Classrooms – it turns out that everything I learnt during it is useful! Time well spent. One teacher, whose name I didn’t write down and I am so sorry for that, teaches media and technology at an alternative school (for students with special needs) in Portland and has a media background. He had some particularly good suggestions and applications to use with students and for teachers to use when producing their own videos:

Someone else suggested using EDpuzzle to track student’s understanding of what they are viewing in any video assigned to them. I can’t wait to use this application, and don’t worry you can add any school name to sign up if – like me – you are using this as an online tutor or are just researching.

To go with this application, I suggest exploring the badly named MoocNote where students can take notes while watching any video.

I am looking forward to my next edCamp! Thanks go to the wonderful organizers in Portland and everyone who pitched a session this time through. 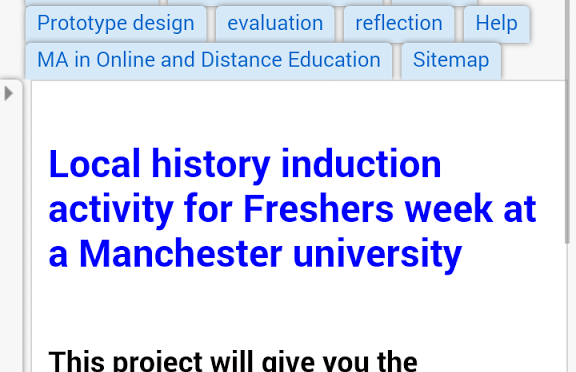 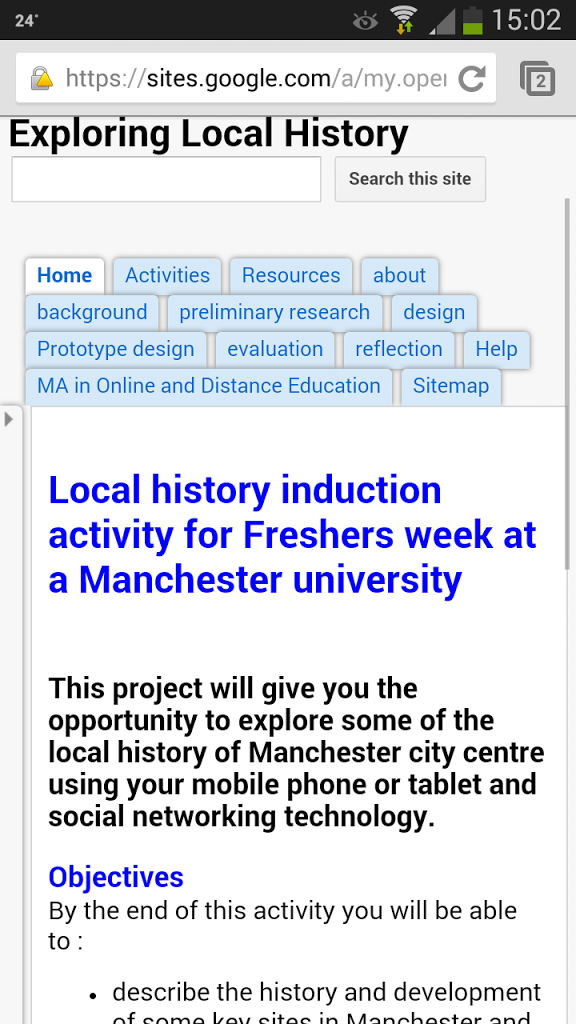 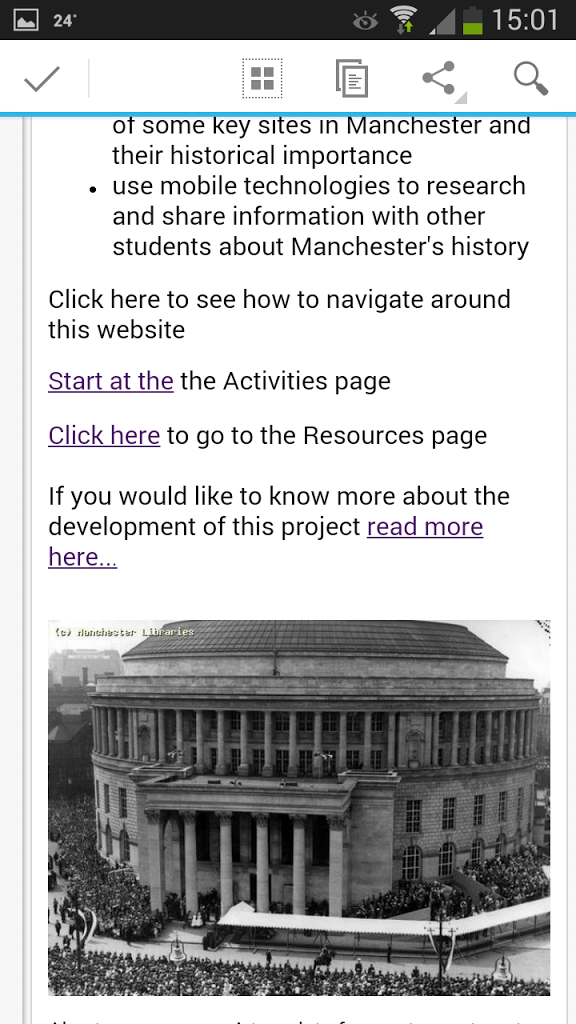 These screenshots represent the first page of our prototype website viewed on my mobile phone.
The objective was to work in a group to produce a resource enabling people to learn about local history (of some location) using mobiles and social networking.

I think, rather remarkably, we succeeded in doing exactly this and we haven’t even yet fallen out.

Having read ahead through the materials I knew this task was coming up and it wouldn’t be exaggerating to say that I was absolutely dreading it. My earlier experience, during Block 1 of H808, of feeling responsible for sending the group off down completely the wrong track was not yet a distant memory and I was quite determined not to do that again! But I also made the decision not to allow that to stop me from just getting on and doing my best to ensure that we all succeeded.
I was quite happy when I was assigned to the local history project, because it was similar to a project that I had started to work on several years ago and I felt that that work might be useful to this. In the end it really wasn’t helpful except as a talking point and a reference for myself when it came to creating a template for teachers to use to set up their own activity. However it also quickly became apparent that almost everyone else wanted to be doing something else which created a slight air of negativity that needed dissipating. It was interesting that quite a few people saw little to no purpose for their own learning to be doing this project, needing it instead to be something tangible that they would be able to use in their own environments in order for it to have meaning. This is something that we struggled with throughout the project.
I additionally chose this project because it played to my strengths; I understand mobile technology, I understand web development and I understand how to mash everything together using social networking. My personal challenge was to step back and allow others to demonstrate their own strengths, for example with organising the site or getting to grips with appropriate theory and working through the module required design challenge it. My contribution to working through the module requirements was to create a Gantt chart for us and continue to encourage everyone to use it. I think most people did end up using it and venture that when people didn’t was when they became unsure about what they should be doing. I also decided to toughen up a bit and if other people were struggling with aspects of the project to resist imagining it was my responsibility to untangle them. That was also the reason I didn’t want the team leader role even though I took on several aspects of it and shared other aspects particularly with Lawrence.
It was interesting to see people shine though and everyone did at one point or another. Our meetings were generally amiable and only occasionally did anyone (including me) succeed in taking us off track. My weakness in meetings was that I had such a clear idea of how the project was going to pan out, not specifically our vision, but the practical side of it, that I was continuously pushing towards that outcome and sometimes not taking into account or enough heed of a suggestion that might take us too far off that track. But at the same time, there was often an unhappy equilibrium between just getting on and doing things, without asking others for permission, and trying to seek consensus.
Following the process outlined by the module had its issues but overall it provided a means to an end. It was interesting, if sometimes a little frustrating, to see a learning design theory in practice. Once we allowed ourselves the liberty of assigning different tasks to different people (at the point when we split up the theoretical and case study research), the whole project became a lot smoother. Before that there was a constant concern that one or two people might not be getting something done and might be holding up the group.
I would be sad if now I were to read that some people were unhappy with their own contribution or unhappy with anyone else because I sincerely believe that everyone in the group contributed critical aspects to the overall process and the product, because whether or not they achieved their personal goal, as a group, we achieved our collective one.
WP to LinkedIn Auto Publish Powered By : XYZScripts.com